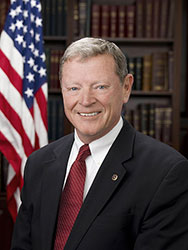 Contact Senator Jim Inhofe (R-OK)
James Mountain Inhofe is an American politician serving as the senior United States Senator from Oklahoma, a seat he was first elected to in 1994. A member of the Republican Party, he chaired the U.S. Senate Committee on Environment and Public Works from 2003 to 2007 and again from 2015 to 2017.

Jim Inhofe (R-Okla.) serves as the top Republican, or the ranking member of the Senate Armed Services Committee. Sen. Inhofe is a proud Oklahoman and long-time resident of Tulsa, Oklahoma.

While our country is in the most threatened position in American history, Sen. Inhofe remains committed to rebuilding our military from the readiness crisis and addressing the growing threats from our enemies. As the Chairman for the Senate Armed Services Committee, he plays a key role in ensuring that our military has the best equipment, training and resources necessary to meet our nation’s diverse security challenges.

Widely regarded by his peers and military leadership as a long time and staunch supporter of our men and women in uniform, he believes that protecting our country is the first function of the federal government, as dictated by the United States Constitution.

A champion of long-term reform of the Defense Department to become more efficient and effective, he has focused on streamlining the acquisition process to avoid more false-starts on modernization programs. He has pushed the military and the defense industrial base to invest in research and development to validate requirements early while simplifying and shortening the process. He has worked relentlessly to deliver the best equipment to our service members, while making sure taxpayers get the best value for their money.

Sen. Inhofe has a long history of public service, beginning with his service in the U.S. Army to his current role in the United States Senate. He has a well-deserved reputation as an unabashed conservative who gets things done. He is a strong advocate for the Right to Life, adoption, and other common sense Oklahoma values, including less government, fewer regulation, lower tax rates, fiscal responsibility, the 2nd Amendment and a strong national defense.

In addition to his role on Armed Services, Sen. Inhofe is also a member of the Environment & Public Works Committee and the Small Business Committee.

As the senior member on the Committee on Environment and Public Works, Sen. Inhofe is a committed supporter of our infrastructure. Inhofe believes one of the inherent roles of government is to provide for a safe and suitable infrastructure to allow our nation access to transportation and fully connect our national economy. In addition to providing for the national defense, he believes the single greatest service we can provide our citizens is the necessary infrastructure to enable the United States to remain the economic engine that drives the world’s economy.

Throughout his time in Washington, D.C., Inhofe has worked toward policies that encourage the U.S. to meet its energy needs domestically. He has worked tirelessly to cut through the red tape on unnecessary and burdensome regulations within the oil and gas industry. One of his greatest achievements to date began in 1999, when Inhofe introduced a bill to give states the freedom to make their own decisions about oil and natural gas regulatory structures, including those concerning hydraulic fracturing. The bill was incorporated in the Energy Policy Act of 2005 and provided the regulatory certainty necessary for the shale boom to establish the United States as the global leader in oil and gas production.

The latest battle on fossil fuels was won during the previous administration, but the war is still being waged by environmental activists around the country and under the Biden administration, the threat intensifies. Sen. Inhofe continues to defend an industry that employs millions of Americans, provides more than a trillion dollars to our economy and helps Americans get to work, heat their homes and cook their meals. With the foundation Sen. Inhofe built and a President who understand the fossil fuel industry, the United States is working to pave a course toward energy dominance.

As member of the Senate Small Business Committee, Sen. Inhofe regularly visits with Chambers of Commerce across Oklahoma. Every community says the same thing: they need relief from overregulation and more support for small businesses. He is an outspoken advocate in Congress for pro-growth policies that allow businesses in Oklahoma and around the country to succeed. In addition, he has worked to ensure family-owned businesses of all types are treated the same under the tax code.

An avid pilot with over 11,000 flight hours, Inhofe became the only member of Congress to fly an airplane around the world when he recreated Wiley Post’s legendary trip around the globe. He is a tireless advocate for aviation professionals.

Prior to serving the people of Oklahoma in the U.S. Senate, Sen. Inhofe served in the U.S. House of Representatives, the Oklahoma House and Senate and as Mayor of Tulsa, Oklahoma. Jim and his wife, Kay, have been married 61 years and have 20 kids and grandchildren.