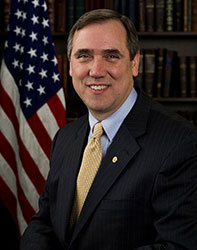 Contact Senator Jeff Merkley (D-OR)
Jeffrey Alan Merkley is an American politician serving as the junior United States Senator from Oregon since 2009. A member of the Democratic Party, Merkley served as the 64th Speaker of the Oregon House of Representatives from 2007 to 2009.

Senator Jeff Merkley comes from a family of fighters. According to family lore, his grandmother lived for a time in a boxcar during the Great Depression. Jeff’s mother stretched a dollar as far as anyone possibly could, and his father overcame a serious illness and went on to work in a lumber mill and become a union machinist. Life wasn’t glamorous, but together, Jeff’s parents saved enough to buy a modest home, take their children on annual camping vacations, and retire comfortably after a lifetime of contributing to their community.

Jeff learned to take that same determination his father took with him to the lumber mill into the classroom—and with the help of his public school teachers, Jeff went on to be the first in his family to graduate from college. He returned to the same blue collar community in Oregon where he grew up, and led non-profits to help Oregonians put roofs over their heads. When he was elected to the Oregon House, he hit the ground running for working families, creating the state’s first-ever rainy day fund, expanding access to affordable prescription drugs, protecting LGBTQ Oregonians from discrimination, and throwing predatory payday lenders out of the state for good.

And now, as a U.S. Senator for Oregon, Jeff has continued to be a champion for everyday people—at a time when the people need a champion more than ever.

“The core place I come from is that ordinary people need a champion.” —Sen. Jeff Merkley

For decades, three distinct crises have been mounting in intensity and urgency. A democracy crisis: massive sums of dark money in politics, more and more obstacles to Americans exercising their freedom to vote, gerrymandering of districts, and the corruption of our government to benefit the most powerful and privileged among us. A climate crisis that threatens the well-being of our families and our businesses while costing lives around the world. And an opportunity crisis: rising costs and stagnating wages that keep countless families from the good paying jobs, affordable housing, quality education, and reliable health care that are the foundations for families to thrive.

Every Oregonian, and every American—regardless of the color of their skin, their zip code, or their income—deserves the same opportunity to make a better life for themselves and their families. But for years, the powerful and the privileged have been calling the shots, playing on fears and resentments to divide us from each other, and stacking the deck in their own favor.

Jeff is fighting to take on the powerful and put power back in the hands of the people. He’s taking on the stagnant wages and the lack of affordable housing in America, leading the fight to get dark money out of politics, and fighting against efforts that rob millions of Americans of their freedom to vote.

In the face of the greatest existential crisis of our lifetimes, Jeff has stood up for bold climate action. He’s fought to protect Oregon’s coastal and agricultural economies from the effects of climate chaos, and has brought labor unions and environmental leaders together to craft bold new legislation to curb emissions and strengthen protections for America’s workers. His innovative proposals have earned the support of union leaders and climate advocates alike, helping to build a climate strategy that not only safeguards the planet but will build a stronger future for America’s working families.

And in the face of the privileged and powerful trying to stack the decks against working Americans, Jeff has taken on David vs. Goliath fights to ensure that today’s kids have the same opportunities he did as the son of a blue collar family. That means he has drafted innovative affordable housing reforms, stood up for student borrowers, cracked down on predatory colleges, and has fought to expand access to affordable, high-quality health care and bring down drug prices—because no hardworking Oregonian should be homeless or crushed by a burden of medical or student loan debt.

In some of the world’s darkest moments in recent history, Jeff has emerged as a leading voice for protecting human rights—from advocating for solutions to our broken immigration and asylum process, to condemning the internment and torture of over one million Uyghurs and other predominantly Muslim minorities by the Chinese government. In June 2018, Jeff sparked a national outcry when he went to the border to investigate the Trump administration’s child separation policy and was turned away from a child detention center. Jeff has remained a champion for human rights and has continued to bring scrutiny and public pressure to push back on the cruel treatment of children seeking asylum.

Jeff is a member of the Appropriations Committee, where he Chairs the Subcommittee on Interior, Environment, and Related Agencies; the Environment and Public Works Committee, where he Chairs the Subcommittee on Chemical Safety, Waste Management, Environmental Justice, and Regulatory Oversight; the Budget Committee; the Rules Committee; and the Senate Foreign Relations Committee. He is also the Chair of the Congressional-Executive Commission on China. He and his wife Mary Sorteberg, a nurse, have been married for more than twenty years and have two children, Brynne and Jonathan.