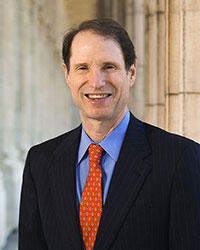 contact senator Ron Wyden (D-OR)
Ronald Lee Wyden is an American politician who is currently serving as the senior United States Senator for Oregon, a seat he has held since 1996. A member of the Democratic Party, he previously served in the United States House of Representatives from 1981 until 1996.

Oregonians know Ron as a senator who listens and innovates. For example, Ron has secured landmark health care and economic wins for our workers and retirees. Always citing the need to “throw open the doors of government for Oregonians,” he holds an open-to-all town hall meeting in each of Oregon’s 36 counties each year. Thus far he has held more than 970 meetings, as well as several virtual town hall meetings sponsored by the nonpartisan Town Hall Project. Wyden’s dedication to hearing all sides of an issue and looking for common sense, nonpartisan solutions has won him trust on both sides of the aisle and put him at the heart of so many of the Senate’s most important debates. In 2011, the Almanac of American Politics described Wyden as having “displayed a genius for coming up with sensible-sounding ideas no one else had thought of and making the counter-intuitive political alliances that prove helpful in passing bills.” The Washington Post’s Ezra Klein wrote: “The country has problems. And Ron Wyden has comprehensive, bipartisan proposals for fixing them.”

In advocating for the needs of working families, Ron wants a tax code that gives small businesses and families an opportunity to get ahead, not one that rigs the rules for multinational corporations or the mega-rich. He led a pioneering expansion of unemployment benefits to help workers shoulder the economic burden of the COVID-19 health crisis, which economists say added more than $200 billion to the economy at a time when it was desperately needed. He updated the “Medicare Guarantee” with improved services for seniors with chronic illnesses, and during the COVID-19 pandemic, he secured Medicare coverage for telemedicine so homebound seniors could safely access medical care. Ron advanced the Family First Act to improve care for vulnerable families and kids, and was the first to promote internet policies that ensure free opportunities for Americans to learn and find good-paying jobs. Ron was also the first to introduce federal legislation to give all Americans the opportunity to vote by mail.

Moreover, when principles are at stake, however, Ron Wyden never shies away from standing alone, even when it means taking on powerful interest groups or his own party. His lone stand against the PROTECT IP Act (PIPA) and its predecessor, the Combating Online Infringement and Counterfeit Act (COICA), put a spotlight on the problematic legislation being fast tracked through Congress and served as a rallying point for the historic Internet protests that ultimately toppled the bills. He stood alone on the floor of the Senate to block right wing efforts to overturn Oregon’s Death with Dignity law; a law that Oregon voters have passed twice. He went head-to-head with the E.P.A. to reduce cancer-causing benzene in gasoline sold in Oregon, and key elements of Wyden’s Kinship Care Act were included as part of major reforms improving the nation’s foster care system. Wyden’s provisions recognized and strengthened support for kinship care, the full-time care and protection of children by relatives.

His relentless defiance of the national security community’s abuse of secrecy forced the declassification of the CIA Inspector General’s 9/11 report, shut down the controversial Total Information Awareness program and put a spotlight on both the Bush and Obama Administration’s reliance on “secret law.”

Wyden has taken the lead on policies that are helping to grow the economy in areas like improved infrastructure through his Build America Bonds program, micro and nano-technology, e-commerce, and through incentives for cleaner sources of energy.

He has won countless awards for his pioneering role in establishing a free and open Internet, is known for his commitment to an open government, having authored the “Stand By Your Ad” law and the resolution ending Senate Secret Holds, and he has been routinely recognized as one of the Senate’s foremost health policy thinkers.

In Oregon, Wyden has authored laws extending permanent Wilderness protections to more than 400,000 acres including Mt. Hood, the Columbia River Gorge, Oregon’s Bull Run Watershed, Badlands, Spring Basin, Copper Salmon and Soda Mountain. He has championed the designation of 1,986 miles of Wild and Scenic rivers in Oregonâ€”more than any other member of Congress, overall, for the contiguous 48 statesâ€”helping Oregon secure the most wild and scenic river designations in the lower 48 states. Since 2000, the Wyden-authored Secure Rural Schools and Community Self Determination Act, commonly known as the “county payments” law, has helped provide a stable source of revenue for historically timber-dependent communities and Wyden’s Combat Illegal Logging Act has helped protect Oregon’s hardwood industries from the import of illegally harvested timber products. Wyden has fought to expand rural access to health care. For example, Wyden secured the creation of a Veterans Affairs outpatient clinic in La Grande for veterans in Eastern Oregon.

Wyden began college at the University of California-Santa Barbara where he won a basketball scholarship and played in Division I competition for two seasons before transferring to Stanford University where he completed his Bachelors degree with distinction. He earned his law degree from the University of Oregon School of Law in 1974, after which he taught gerontology and co-founded the Oregon chapter of the Gray Panthers, an advocacy group for the elderly. He also served as the director of Oregon Legal Services for the Elderly from 1977 to 1979 and was a member of the Oregon State Board of Examiners of Nursing Home Administrators during that same period. He served in the U.S. House of Representatives from 1981 until his election to the U.S. Senate.

Senator Wyden’s home is in Portland; he is married to Nancy Wyden, whom he married in September 2005. He has five children: Adam, Lilly, Ava, William and Scarlett.