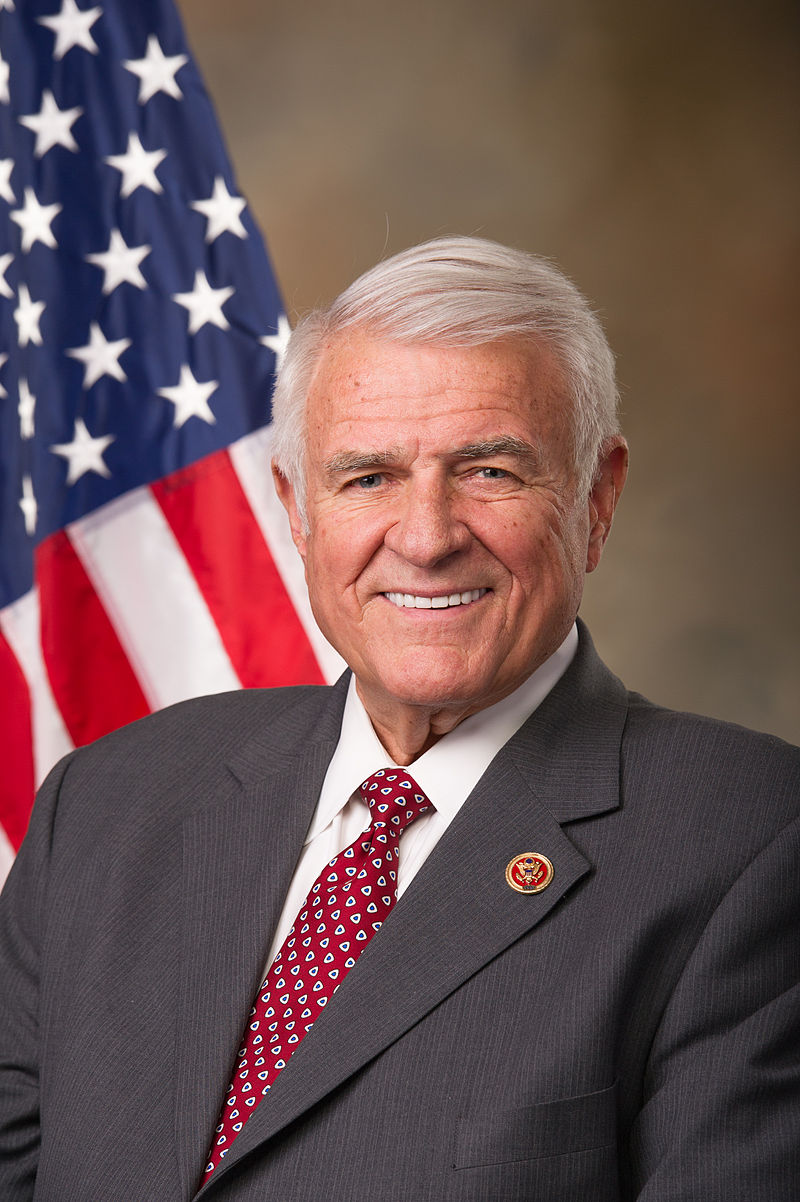 Contact Representative John R. Carter
John Rice Carter is the U.S. Representative serving Texas's 31st congressional district since 2003. He is a Republican. The district includes the northern suburbs of Austin, as well as Fort Hood.

After graduating with a history degree from Texas Tech, and finishing his law degree from the University of Texas, John Carter decided to settle down in Central Texas for the exact same reasons as everyone else; great schools, low taxes and a safe community to raise his children. He never expected to be a U.S. Congressman, but after spending 21 years on the Williamson County District Court bench, and aptly earning the beloved nickname “Judge,” he thought that his Texas-style no-nonsense approach to the rule of law was sorely needed in Congress.

In fact, the driving force behind his bid for Congress began on September 11, 2001. As Judge watched the towers fall, and saw his beloved nation in mourning, he prayed for guidance on how to serve his country. On the bench, Judge was known for bringing justice to those who threatened the safety of his community, and Judge thought that skill would be useful as the United States navigated a new enemy and sought safety once again.

Judge was elected in 2002. His expertise on protecting the homeland, and his commitment to taking care of those who wear the uniform, and their families, meant he quickly established himself as a leader in Congress. He’s one of the few members who has written legislation signed into law by Presidents Bush, Obama and Trump.

Judge prides himself on being a great listener and skilled problem solver, which he believes is the key to representing Central Texans well. When constituents come to Judge with a problem, Judge Carter goes to work to solve it. One of Judge’s most meaningful bills signed into law was the Veterans Transplant Coverage Act, brought forth by a Leander constituent that was denied transplant coverage from the VA health care system. Now under Judge’s law, no veteran can ever be denied live-donor transplant coverage from the VA again.

To Judge, Central Texas will always be home, that’s why he doesn’t live in Washington. Instead, he chooses to sleep on a pull-out couch in his office when he works in our nation’s capitol. Around town John still goes by “Judge,” but at home, he’s known as “grandpa” to his six grandbabies. Mrs. Carter and Judge met in Holland and have been married for 51 blissful years. They raised their four wonderful children on Christian beliefs and strong Texas values all in Round Rock, Texas. The Carter kids all stayed local for the same reasons as everyone; Central Texas is the greatest place on earth.

I am proud to have supported the Tax Cuts and Jobs Act. In just six months since it’s passage, over 1 million jobs have been created, unemployment is at the lowest rate since 1969 and 90% of Americans are seeing more money in their pockets. In fact, Central Texas businesses are feeling the positive impacts of tax reform! Charlie Bravo Aviation in Georgetown, TX gave their employees a bonus due to the Republican tax reform legislation.

Your Republican House of Representatives have pushed 40+ jobs bills that:

Education is one of the most important facets of our society. I am a strong advocate for career and technical education programs, so that young people can get well-paying jobs without a four year degree. I’m proud that Texas’ 31st Congressional District is a leader in CTE programs, and thousands of Central Texas student have benefited from the availability of these programs.

Obamacare continues to be a disaster for Texas families. It has raised premiums by 82% and left Texans with less options for health care. Texans deserve a system that puts them, not government bureaucrats, in charge of their health care decisions. I support repealing Obamacare and replacing it with a free-market health care system where competition drives down costs and increases options. I believe America’s health care system should protect preexisting conditions, and empower patients by giving them options in their care.

I also believe we should improve incentives for students and doctors to help address the shortages our country is facing in the medical field. These incentives will help create a more stable workforce and ensure the best care for patients.

Finally, we have to work towards improving Medicare so seniors are receiving the medical care they deserve.

I back the blue. Law enforcement officers have a tough job, and I consider it my duty to ensure they have the resources they need. Throughout my time in Congress, I have secured over $3.5 million for local law enforcement agencies in TX-31. I’ve also authored legislation to create a grant program so that law enforcement officers have access to active shooter training at the ALERRT center in San Marcos, TX. This training teaches officers to neutralize a threat and save lives.

Our Texas economy is a model for the rest of the country to get back to work! The President and Republican controlled Congress are working hard to cut spending!

The individual is the solution to our economic recovery, not another government program and/or giveaway. It’s the grit and determination of Americans that has and will continue make this the best country in the world.

American’s will rebuild their communities together, not Washington bureaucrats micro-managing our lives. “We need more Texas in Washington and less Washington in Texas”.

Texas is leading the way and it’s time to share the message of continued success!

The Declaration of Independence states that life, liberty and the pursuit of happiness are inalienable rights. I believe that life begins at conception and that life should be protected.

Just as we have fought for freedom and justice throughout our nation’s history, we must fight for the lives of the hundreds of thousands of unborn children who are aborted in the U.S. every year.

I’m proud to be endorsed by National Right to Life, the nation’s largest pro-life organization.

I will fight to protect the precious lives of those who cannot protect themselves.

As a Member of Congress from Texas who is married to an immigrant, I believe we must provide a solution to create a sustainable system. Texas is on the front lines and has the most experience with this broken immigration issue. Texas shares the most miles with Mexico (1,241 miles out of 1,933 miles total). As Texans, we go to church together, our kids go to school together, and we shop at the grocery store together. However, we all must live under the rule of law, which is what our country was founded upon more than 200 years ago.

As I travel throughout Central Texas, my neighbors and I continue to talk about immigration in a different tone than the rest of the country or mass media. We believe we should: First, secure the border with additional Border Patrol and ICE Agents. We must build more infrastructure along the border to allow 100% situational awareness, and continue to invest in technology. Secondly, to grow our economy, we must meet the needs in the industries with workforce shortages (Hi-tech, agriculture, construction, restaurant, hospitality, etc.) so America continues to be a global leader. Lastly, we must implement E-verify on every employee in the country so we can ensure that taxes are paid.

Immigration is an emotional issue but we can fix the problem with logical and compassionate solutions. As Americans we can find a solution to secure our border, grow our economy, create jobs, address illegal activity and continue to be the most competitive and compassionate country in the world!

supporting our Troops and Fighting Terrorism

I’m honored, privileged, and humbled by the opportunity to represent the greatest fighting force on the face of earth, Phantom Warrior’s at Ft. Hood, Texas. I carry this badge of honor throughout my daily prayers, committee work on Defense Subcommittee on Appropriations and Co-Chairman of the Army Caucus.

I will provide the same commitment our men and women and their families provide for the citizens of the United States of America to secure the funds to allow them to continue being the beacon of Liberty throughout the World. In addition, that commitment follows those heroes’ home to the spouses and their families whose sacrifice shall never be overlooked!

Unfortunately, other things have to followed us home. When radical Islamic terror struck in the heart of our congressional district at Fort Hood in November 2009, I spoke out loudly and clearly on the terror links that led to the death of 13 adults and one unborn child. I passed legislation to give the victims from the Fort Hood attack the same recognition awarded to our casualties at the Pentagon on September 11, 2001, as well as providing their families the same level of benefits.

As a gun owner and a Concealed Handgun License (CHL) holder, I understand the importance of responsible gun ownership.

As a member of the National Rifle Association (NRA), I’m proud to receive their endorsement.

I pledge to fight against restrictive gun legislation.