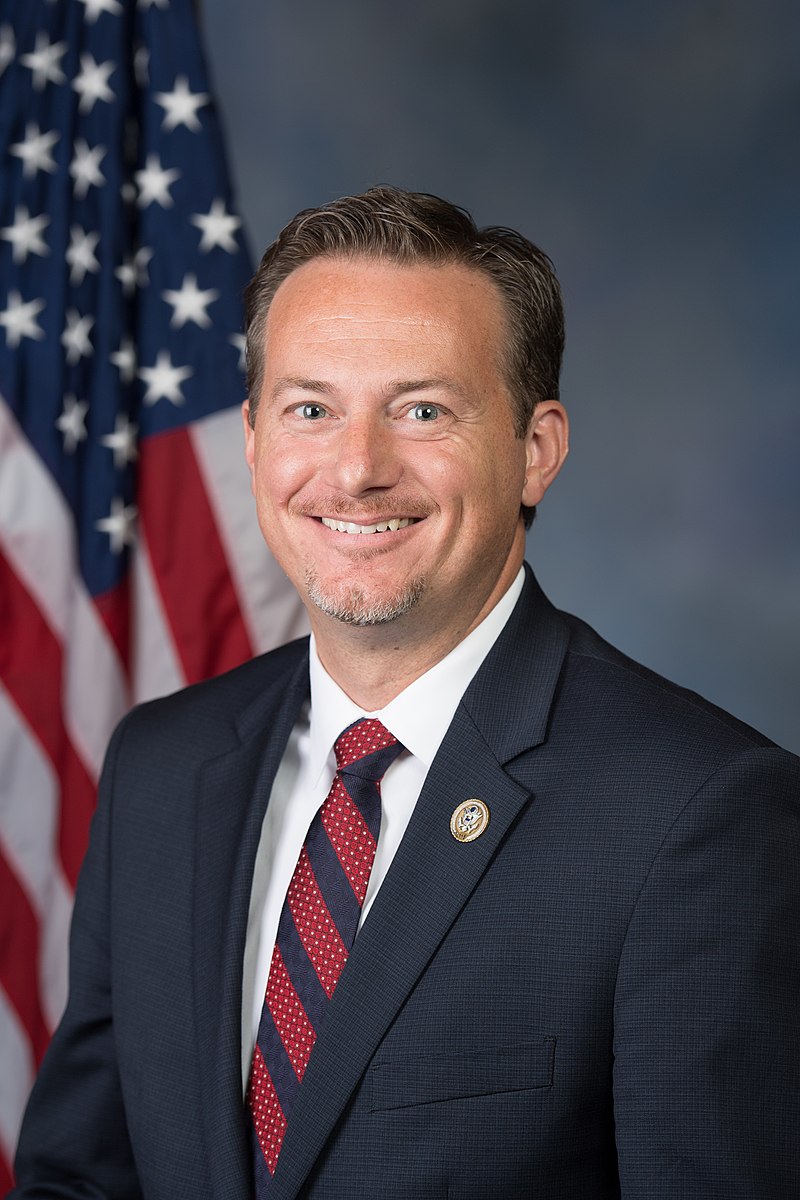 Congressman Michael Cloud is a husband, a father, and a grateful citizen of the United States who has a passion for helping people and making a difference in the State of Texas and our nation. He represents and serves the twenty-seventh district of Texas, which includes thirteen counties along the coastal bend of Texas going north to almost Austin and up the coast to almost Houston – a responsibility that he takes very seriously every day.

Elected in 2018, Congressman Cloud’s conservative record standing up for our Texas values and our nation’s founding principles speaks for itself. He serves as the only Texas Republican on the House Agriculture Committee and also serves on the House Oversight Committee.

Before being elected to Congress, Michael had a wealth of experience in the private sector, in ministry, and in Texas grassroots politics. He was a small business owner and founder of a video production company, served as the media and communications director at Faith Family Church for over a decade, and served as the GOP Chairman for Victoria County for seven years as well as represented twenty-one Texas counties as a member of the State Republican Executive Committee – the governing board of the Texas Republican Party.

A graduate of Oral Roberts University, he loves to run, hang out with his family, and motivate people to engage with their government. His wife, Rosel, of twenty-one years, is a naturalized citizen from Mexico, a public-school teacher, and they are proud parents of three children, Ean, Zoe, and Kent.

It is a tremendous honor for him to represent his fellow Texans in Congress and help preserve our constitutional liberties for future generations.

Elected in 2018, Congressman Cloud promised to stand up for our shared Texas values and our nation’s founding principles, and he has followed through on that promise.

His Constitutional-conservative record standing up to a broken DC culture and promoting good governance speaks for itself. He serves as the only Texas Republican on the House Agricultural Committee and also serves on the House Oversight Committee.

Providing for the common defense is the first and most important legitimate Constitutional responsibility of our federal government. China now has the world’s largest navy. Iran is pursuing nuclear weapons. North Korea is not being kept in check. Now is the time to make the right investments in our military.

Michael Cloud is committed to ensuring that the United States’ military has the resources necessary to secure our trade routes, combat threats, deter enemy nations, defend our allies, and protect the life and liberty we hold dear.

Our Founding Fathers understood that the only defense against tyranny is an armed citizenry. Michael Cloud is constantly working to protect your right to keep and bear arms. The author of the “Protecting the Right to Keep and Bear Arms Act” – which boasts an endorsement from the NRA and Gun Owners of America – would keep an out-of-control federal government from coopting a national emergency to enact gun control.

With an “A” rating from NumbersUSA, Michael Cloud has led in Congress on highlighting the humanitarian and national security crisis on the border – connecting the dots between the cartels, human trafficking, and loopholes in our immigration system.

Cloud believes in a comprehensive approach to solving this crisis.He took a rare opportunity to testify in front of the House Oversight Committee on how Texas’ 27th Congressional District has been impacted by the criminal activity on the southern border. The Biden Administration has single handily halted construction on the border wall and through his open border policies, reversed the progress made by the Trump Administration.

Michael Cloud has led other Members of Congress to the border and was invited by Republican Leader Kevin McCarthy to join him in El Paso.

To provide the good men and women of the Customs and Border Protection (CBP) with a force multiplier, the border wall, particularly in the Rio Grande Valley, should be completed. This enables CBP to direct their compassion and professionalism on hot spots where cartels focus on trafficking humans and drugs. Congress should cut cane along the Rio Grande to help CBP prevent cartels from hiding.

Congress should also declare certain cartels as Foreign Terrorist Organizations and increase the number of CBP personnel on the border to ensure operational control of the border rests in our hands.

Our nation must keep its promise to the men and women who have served. We owe our veterans a tremendous debt and must ensure veterans have access to quality health care and education.

Congressman Cloud introduced the “Improving Confidence in Veterans Care Act”, which passed the House in the 116th Congress, has assisted Texas veterans all over our district to resolve VA claims, and sponsored a successful amendment to the “Veterans’ Access to Childcare ACT” to improve VA accountability.

He considers it a great honor to make sure our veterans are honored and well served by the nation that they have given up so much for.

We are blessed as a nation to possess abundant resources. America is more secure when we are not dependent on oil from foreign countries. Our region needs to continue to lead as a major exporter of American energy through our ports, pipelines, and infrastructure.

Featured in Shale Magazine as someone in Congress working to get things done, Congressman Cloud has prioritized expanding our energy exports capability. He was appointed to the U.S.- Mexico Interparliamentary Group to defend Texas interests in trade, energy, and border negotiations. By and large, American producers lead the world in best practices and the world is made a better place when global markets choose and have access to U.S. exports.

The American dream is not dead. Freedom leads to prosperity. A low regulatory environment fosters an economy of innovation and growth that leads to opportunity and prosperity for American families.

Small businesses around our communities are major job creators and the fuel of our Texas economy. We need to keep them alive and healthy. By cutting back federal regulations and simplifying our convoluted tax code – we can keep our American economy the best in the world.

The fiscal health of our nation is in complete jeopardy. Both parties have failed to produce a balanced budget within a broken system. Congressman Cloud is constantly thinking about our children and grandchildren and the America they will inherit. Without a serious congressional commitment to responsible spending, our country will remain on a path to fiscal ruin.

The federal government should not be picking winners and losers in our economy and subsidizing people to not work. Washington could learn a lot from Texas which is why Congressman Cloud fulfilled long-time campaign promises by introducing two bills that would start the process of getting our fiscal house in order: “The Cost Estimates Improvement Act” and the “Federal Agency Sunset Commission Act”.

Congressman Cloud is a “Texas Congressional Champion” with a 100% voting record from FreedomWorks. He has voted repeatedly to push back on the Washington wasteful spending culture.

Texans are leaders in agriculture and the best stewards of Texas land. As the only Republican Member of Congress on the Agriculture Committee from Texas, Michael considers it a great honor to make sure our food supply is protected, that trade policies are structured to export more American products, and that the industries that Americans depend on every day flourish.

Our farmers and ranchers do not need the Environmental Protection Agency (EPA) or other government agencies interfering with property rights, micro-managing water on their land or passing unnecessary, intrusive regulations.

The federal government, when putting the government between you and your doctor, made a wreck of our health insurance system. As a result, Texans are now experiencing skyrocketing premiums with less coverage — resulting in less actual healthcare provided.

Obamacare must be repealed, and healthcare must be driven by a market-oriented approach that brings down costs and expands access to quality care. Healthcare should be personal, affordable, and portable. Also – Michael Cloud will always fight to keep taxpayer dollars from funding abortion.

As the father of three children and the husband of a public-school teacher, Congressman Cloud understands our urgent need to provide a quality education for all our nation’s students. Washington bureaucrats should not be involved in teaching students and we, as a community, should be diligent in pushing back against divisive progressive ideologies that have no place in our classrooms.

Local parents, educators and school boards are best suited to know and respond to the needs of each student. We need to free teachers to teach instead of just teaching toward a standardized test and provide parents educational choices for their children where every child regardless of where they live, or their economic status can get a great education.

The core building block of a healthy, productive society is the family. Yet political forces are at work to discriminate against and destroy this sacred institution.

Congressman Cloud recognizes the essential role of the family — and works to enact policies that recognize parental rights, respect biblical marriage, conscience rights, and the importance of the family for our society.

The Constitution is clear that the free exercise of religion shall not be prohibited. Michael stands strong against government attempts to discriminate against people of faith.

He has actively opposed and voted against the “Equality Act” that would endanger religious freedom for churches and individuals alike and has a 100% rating from Family Research Council for standing up for our families.

A foundational moral principle in our nation is the understanding that every life has value. Michael believes life begins at conception and will continue to work to ensure each child is given the opportunity to experience the most basic of rights — the right to life. He is 100% pro-life and recognized by the Susan B. Anthony List for his pro-life leadership.

He led the successful effort to end a hidden surcharge that funded abortion in the “Affordable Care Act” insurance plans and has stood in support of the “Born Alive Act”. He will also do everything in his power to make abortion as rare as possible, until the day where it can be illegal to destroy human life.