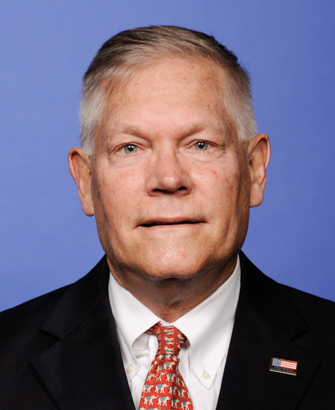 Contact Representative Pete Sessions
Peter Anderson Sessions is an American politician from Texas who is the Representative for Texas's 17th congressional district. He has served in the U.S. House of Representatives for 11 previous terms. He is a member of the Republican Party.

Pete and Karen Sessions are the proud parents of five sons. Bill and wife Kayle, both graduates of Texas Tech University Medical School, are completing their medical residencies in Greenville, SC. Alex, a special-needs young man, works diligently for Home Depot in Austin, TX. Conor, a U.S. Navy veteran, works in the cattle industry in Montana. Liam, a 2020 graduate of Baylor University, works in our nation’s Capitol. Nicholas, a junior at Rollins College, is a member of his college golf team.

Born and raised in Waco, Pete attended Waco public schools until the ninth grade, playing sports, becoming an Eagle Scout, and throwing newspapers for the Waco Tribune – Herald. Pete left Waco when his family moved to Washington D.C., where his father began his career at the Department of Justice.

Pete’s parents have always been an example to Pete. As Bill Sessions (Baylor BA and JD) rose from the Department of Justice to U.S. Attorney, then Federal Judge and, finally, to Director of the FBI, he impressed upon Pete a sense of duty and integrity for all positions of public service – elected and unelected. Pete moved back to Texas as his father became the U.S. Attorney in San Antonio, where Pete graduated from Churchill High School.

After graduating from Southwestern University in Georgetown, Texas, Pete joined the Southwestern Bell Telephone company, where he worked for 16 years, never missing a day of work and taking early retirement as District Manager, just prior to running for Congress.

Throughout his professional life, Pete has been very involved in community activities, serving in various leadership roles with the Boy Scouts of America, disability assistance and local conservation groups, as well as serving on the Board of Trustees of his alma mater for twelve years.

In 1994, Pete ran for Congress by challenging liberal Democrat congressman John Bryant in a district that stretched from east Dallas to many counties now in the 17th Congressional District. Falling just shy of pulling off an upset, Pete ran again in 1996, winning that year and serving in Congress from 1997 to January of 2019.

While in Congress, Pete was part of the Republican House majority that balanced the federal budget four years in a row from 1998 to 2001. He led the National Republican Congressional Committee (NRCC) as its Chairman from 2009 through 2012, directing the party to regain the House majority with a net 63-seat victory in 2010, which removed Nancy Pelosi as Speaker.

In 2018, Democrats spent $10 million against Pete in a district that went dramatically for Beto O’Rourke over Ted Cruz, in a year that swept Nancy Pelosi back into office as House Speaker.

Returning to the private sector, Pete watched in amazement as Pelosi and her House Democrats openly adopted socialist policies.

While contemplating how he could help reverse the nation’s lurch to the left and the young generation’s fascination with socialism, Pete began receiving calls from conservative activists in Central Texas. They encouraged him to run for his hometown seat.

After talking with his wife and family, Pete decided to jump back in the fight and is committed to achieving five specific accomplishments in Congress:

When I ran for Congress, I did so to stand for the principles that have made America the greatest nation on earth, a democracy based on our Constitution and three equal branches of government. However, to work, our legislative system requires elected representatives to respect each other as a show of respect for all citizens.

From the start of this new 117th Congress, I was willing to explore common ground with Democrats to address the many challenges we face today as a nation. Unfortunately, it soon became obvious the Democrat majority is only interested in “transforming” our government into an over-powering central government controlled by one party—and only one party—theirs.

Democrats erode our nation by disrespecting elected representatives who dare oppose their policies, and many have lost integrity in how they advocate for their proposals. Opponents are “racist” when seeking true equal treatment under the law, “conspiracy theorists” when wanting election integrity, and “nativist” when calling for enforcement of our immigration laws.

For these reasons, I am committed now more than ever in bringing back a conservative Republican majority to the House of Representatives in the next election.

Under President Biden’s tyrannical reign, the United States has faced many crises in the last year, and many believe our best days are behind us. Conservatives continue discussions about the values that make this country exceptional. America is a blessing from God and is great for a variety of reasons, but Pete believes it is mostly because America is the “Land of Opportunity,” based on a free-market system. He hopes that you will join in supporting Republican candidates, up and down the ballot, who also believe in these ideas and will fight hard so the land of opportunity will flourish for future generations.

The Democratic Party in the White House and Congress have attacked parents and their God-given right to raise them how they see best fit. The Biden administration is trying to push their socialist agenda on the next generation and limiting parental involvement. Curricula in many school districts are teaching children that transgender lifestyles are “normal.” They are also using outside organizations to force their radical far-left ideas on teachers, parents, and students across the country. Right now, we are in an all-out ideology war. Conservatives will not tolerate parents being lied to and shoved into a corner of submission. Republicans will promote parental involvement, abundant educational opportunity, and stop laws that take away parental rights.

Pete has a 100% lifetime voting record with National Right to Life.

Pete has a 100% lifetime voting record with the Texas Farm Bureau.

Pete Sessions will continue to move American First policies forward like restoring the build of the southern border to safeguard the American people.

“Solving our immigration crisis involves more than just building the wall on the southern border, which I wholeheartedly support. The surge of illegal immigrants crossing our border is a direct correlation to Biden’s derelict of duty inviting millions of people to invade our country,” said Sessions.

Today, we pay billions and billions of dollars in benefits to legal immigrants, even though our laws have always given preference for ‘self-sufficiency’ among those who immigrate to our nation. President Trump tried to stop this abuse, and I know how to lend him a hand in the United States House of Representatives to finish the job. Together, we can work to pass these needed reforms. A plan and legislation must occur between the agreement of Congress and the White House NOW. Americans should feel safe in their homes and neighborhoods and feel confident that their hard-earned tax dollars are going to American needs, not to those disrupting the Rule of Law.