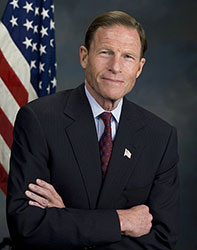 Contact Senator Richard Blumenthal (D-CT)
Richard Blumenthal is an American attorney and politician currently serving as the senior United States Senator from Connecticut, a seat to which he was first elected in 2010. A member of the Democratic Party, he is ranked as one of the wealthiest members of the Senate, with a net worth of over $100 million.

Senator Richard Blumenthal is an American politician and lawyer. He is serving as a Senior U.S. Senator from Connecticut under the Democrats. First elected in 2010, Richard is one of the wealthiest members of the U.S. Senate. He has also served as Connecticut’s Attorney General.

Richard was born in Brooklyn, New York, on February 13, 1946. Life was a bed of roses for Richard as he was born to a wealthy parent.

He completed his tertiary education at Harvard College. He also studied at Trinity College before acquiring his J.D. at the Yale Law School in 1973. He was the editor-in-chief at Harvard College and Yale Law school. In 1970, Richard joined the US Marine Corps Reserve. He continued his service till 1976, when he attained the rank of Sergeant.

Originally sworn in on January 5, 2011, Richard Blumenthal is serving his second term as a United States Senator from the State of Connecticut.

With a father who fled Nazi Germany at age 18, and a mother who left Nebraska’s farmland to become a social worker, Richard Blumenthal was raised with a deep dedication to public service, a duty to give back by helping others, and a bedrock belief in hard work.

After graduating law school in 1973, Senator Blumenthal clerked for then U.S. District Judge Jon Newman, and then for United States Supreme Court Justice Harry A. Blackmun.

He then transitioned to lead U.S. Senator Abraham A. Ribicoff’s staff as an Administrative Assistant (now known as Chief of Staff).

From 1977 to 1981, Senator Blumenthal served as a U.S. Attorney for Connecticut, prosecuting drug trafficking, organized and white-collar crime, civil rights violations, consumer fraud, and environmental pollution. He served in the Connecticut House of Representatives from 1984 to 1987, and the Connecticut State Senate from 1987 to 1990. As a volunteer attorney for the NAACP Legal Defense Fund, Senator Blumenthal saved the life of an innocent, wrongly convicted death row inmate who came within hours of execution.

Senator Blumenthal served an unprecedented five terms, from 1991 to 2011, as Connecticut’s Attorney General, fighting for people against large and powerful special interests. His aggressive law enforcement for consumer protection, environmental stewardship, labor rights, and personal privacy helped to reshape the role of state attorneys general nationwide, and resulted in the recovery of hundreds of millions of dollars for Connecticut taxpayers and consumers each year.

A key player in the national fight against Big Tobacco, he helped end deceptive marketing aimed at children—a victory significantly lowering youth smoking rates, and compelling a multi-billion dollar settlement for Connecticut taxpayers. He also helped lead a coalition of all 50 states that culminated in historic agreements with social networking sites to better protect children from internet predators.

Senator Blumenthal personally argued several major cases in court, including four before the U.S. Supreme Court—among them his successful effort to uphold the Connecticut sex offender registry in the Supreme Court. He fought and sued the federal government for failing to follow or enforce environmental laws and energy statues, as well as imposing multimillion dollar unfunded mandates on local taxpayers under the No Child Left Behind Act.

In 2010, Senator Blumenthal was elected to represent Connecticut in the United States Senate. He was reelected in 2016.

In the Senate, Senator Blumenthal has built on his longtime advocacy for consumers by holding companies accountable for the safety of their products. He has pushed GM to fix its cars’ fatal defects, fought to keep dangerous nicotine products out of the hands of children, and worked to make communities safe from hazardous chemicals. As chair of the Commerce Consumer Protection subcommittee, he has led hearings and legislation to hold tech platforms like Facebook, Google, Twitter, and TikTok accountable for privacy failings, toxic and illegal content, and other serious harms.

Richard served as an administrative assistant and legal clerk for many politicians. He worked for many private law firms. He also served as a legal counsel for the NAACP Legal Defense funding from 1981 to 1986.

Senator Richard Blumenthal became the U.S. District Attorney for Connecticut from 1977 to 1981. He served a term in the Connecticut House of Reps in 1985. In 1986, he was elected to the Connecticut Senate and later as the Attorney General in 1990.

After 20 years as the Attorney General, Richard announced his desire to run for the U.S. Senate seat in 2010. He defeated Republican Linda McMahon to assume the seat. He won again in 2016.

While serving as the Attorney General, Senator Richard Blumenthal made many legislative achievements. He was one of the Senators that filed a multibillion-dollar lawsuit against the tobacco industry. He was also a key figure in an antitrust suit against Microsoft Corporation.

As a Senator, Richard gave his full support for the background check on firearms. He had an ‘F’ rating from the National Rifle Association for his support for gun control. He also requested for the Centre for Disease Control to conduct a study on gun violence. He also supported the banning of suspected or known terrorists from purchasing firearms.

Senator Richard claimed he served as a war Veteran in Vietnam. In 2010, he made it clear that it was a misstatement. The senator served in the US Marine Corps Reserve during the Vietnam era. But, he was never deployed to Vietnam. The misstatement has led to the confusion and frequent mischaracterization of his biography.

Richard was also linked with Hartford Mayor Eddie Perez’s corruption and extortion scandal in 2007. Richard made fundraising of $100 per person in support of Mayor Eddie Perez. Yet, the mayor allegedly spent over $30,000 to fix his bathroom.