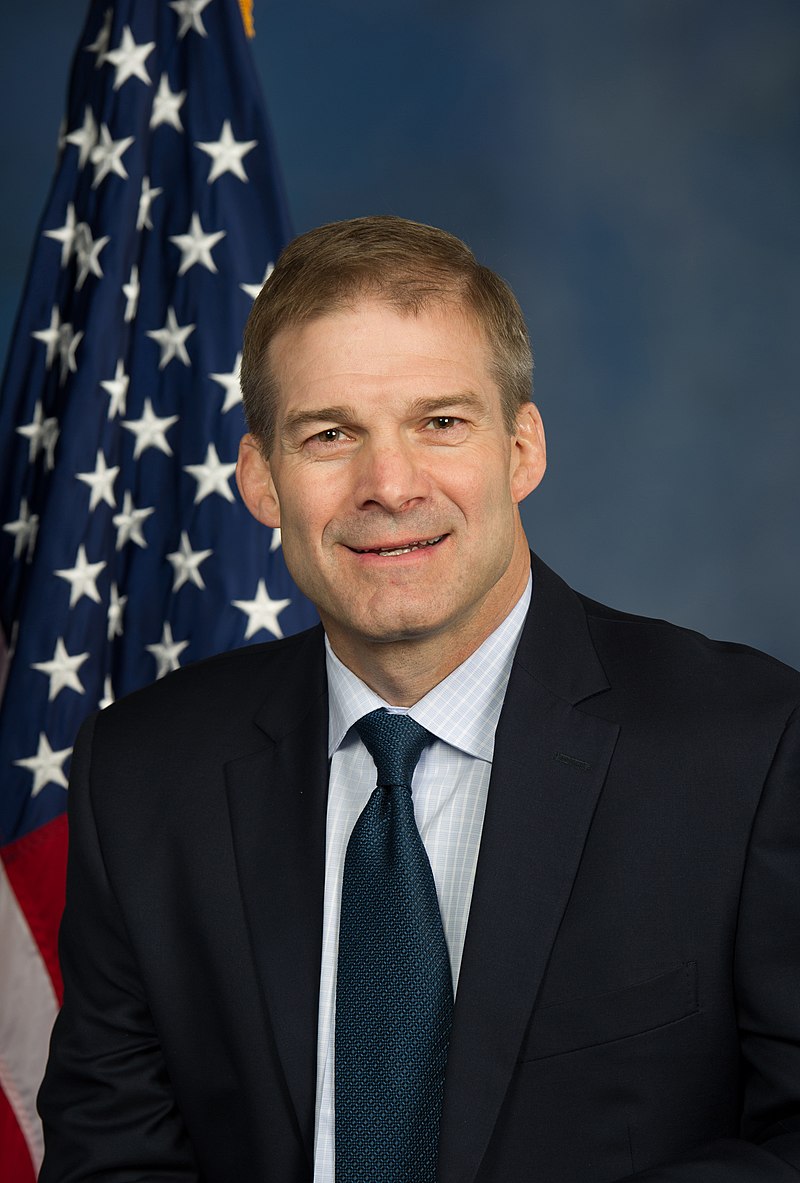 Contact Representative Jim Jordan
James Daniel Jordan is an American politician serving as the U.S. representative for Ohio's 4th congressional district since 2007. His district stretches from Lake Erie to just below Urbana in the north-central and western portions of the state and includes Lima, Marion, Tiffin and Elyria.

Jim Jordan was raised in Champaign County, Ohio, graduating from Graham High School in 1982, where he was a four-time state champion in wrestling with a career record of 150-1. He went on to earn a Bachelor’s Degree in Economics from the University of Wisconsin, where he was a two-time NCAA wrestling champion. He later earned a Master’s degree in Education from the Ohio State University and a Law Degree from Capital University in Columbus, Ohio.

Jordan is a fiscal conservative who believes that families and taxpayers, rather than government, know best how to make decisions with their money. Throughout his career, Jim Jordan has led the fight against tax hikes, including those proposed by his own political party. He believes that cutting taxes and letting families keep more of what they earn helps build strong communities and a vibrant economy.

Jordan has been an advocate of the taxpayer, looking for waste, fraud and abuse in the federal government. He serves as the Ranking Member on the House Judiciary Committee and on the House Oversight Committee.

As one of the most conservative members of Congress, his efforts have earned him recognition from Citizens against Government Waste, Family Research Council, Americans for Tax Reform’s Friend of the Taxpayer Award and the 2012 Weyrich Award for “National Legislator of the Year.”

Coming from a family that is heavily involved in farming, sound agricultural policy is very important to me. We need policies that open up the playing field, so that our farmers can better compete in the national and international markets. It is unfair that American farmers face high tariffs when exporting their products to other countries while those same countries can import their goods to the United States tariff-free. I will continue working in Congress to enact policies that strengthen Ohio’s farming base and keep it strong.

The federal government spends six million dollars a minute, each minute, every day of the year. This unfettered spending costs each American family over $23,000 a year. Federal government spending is out of control, and it is the responsibility of Congress to fix the problem. If federal spending is not reigned in, we will find it more and more difficult to avoid the looming financial crisis posed by the retirement of the Baby Boomers and the tens of trillions of dollars in unfunded liabilities their future government benefits represent.

That’s why during the FY2008 appropriations process, and in my first year in Congress, I stood on the House floor to offer a series of “fiscal discipline amendments” to hold the line on runaway federal spending.

I will continue seeking to instill fiscal sanity in government, so that we will be able to keep our promises to retirees while providing a sound future for our children and grandchildren.

A strong national defense is vital to the long term security and stability of our nation. We must continue to invest in cutting edge technologies that will preserve our military superiority and act as a deterrent against rogue states that would do us and our allies harm. Continuing our fight against international terrorism is also vital to long term security and stability. We must remain steadfast in getting the job done in Iraq and Afghanistan, supporting our troops and giving them the tools they need to succeed, and working to equip the local governments with the training and know how they need to reunify and rebuild their countries.

I was able to see firsthand some of our troops’ progress during a visit to Iraq in July 2007. It is my hope that through continued progress, Iraq will grow into a peaceful and prosperous country, providing us with an excellent ally and influencing the whole Middle East toward peace and democracy.

Educating our children is vital to our nation’s continued prosperity and economic strength during this time of increasing competition in business and trade from abroad. Successful education policy almost always starts at the local and state level rather than the federal level, and I support policies that give parents the freedom to guide their children’s education.

America is far too dependent on Middle Eastern oil. Having suffered years of record high gas prices, the American people deserve greater freedom from Middle Eastern manipulation of the oil markets. We need to increase domestic oil and gas supply by exploring and utilizing more of the energy resources we have at home. We must also help keep our nation on the cutting edge by exploring alternative sources of energy and better ways to make use of them. At the same time, we must be careful stewards of precious natural resources—taking care to avoid strategies that damage our landscape, environment and pose health risks to our citizens.

I agree with most Ohioans that our Federal Government spends far too much and is overly large, cumbersome and bureaucratic. Many of the roles currently filled by government agencies would be better left to individuals, private businesses and non-profit organizations. I take my government oversight responsibilities very seriously, and am well-positioned to work on this issue from my seat on the House Oversight and Government Reform Committee. During the 114th Congress I will continue to consider and propose ways to reduce government spending and eliminate redundancy in government agencies.

First and foremost, we need to get health care reform done right, not done fast. Passing another thousand-page bill without amendments or debate will do nothing to help the economy, create jobs, or reform health care.

Right now, the thousand-page health care bill will cost taxpayers about a billion dollars per page and will impose new taxes on individuals and businesses. It will force Americans from private healthcare into a government-run system that will put Washington bureaucrats in charge of rationing care. This government takeover would add $239 billion of deficit over ten years, pushing our already unstable finances further toward bankruptcy.

We need health care reform that puts medical decisions in the hands of doctors, families and patients, not government bureaucrats or insurance companies. We need to make our high quality care more affordable, and I believe we can do so through a number of reforms, like offering financial assistance to those who cannot afford coverage, expanding options to include health savings accounts and allowing families and individuals to buy coverage with the same advantage given to businesses.

Throughout my years serving in the Ohio General Assembly and now in the U.S. Congress, I am proud to stand and defend the lives of the unborn. I am committed to the view that life is sacred, that it begins at conception and that the Founding Fathers were correct in placing life first among the list of rights the Constitution was written to defend. This conviction informs all that I do in Congress, including the bills I sponsor and the speeches I give from the House floor. H.R. 618, the Right to Life Act, was the first bill I co-sponsored after taking office in January 2007. Currently, I am working on a bill called the Ultrasound Informed Consent Act, which employs ultrasound technology to save lives by offering women the opportunity to see their babies and encouraging them to pursue adoption and other abortion alternatives.

Additionally, I am committed to defending the sanctity of marriage and the family. Our families are the foundation of our country, and America is strongest when our nation’s families are sound. I oppose all attempts to redefine marriage, and I support the right of parents to supervise what their children learn and how they are educated.

I am fully committed to preserving Social Security benefits for current retirees, as well as those who are approaching retirement age. Social Security is a sacred promise to Americans, and Congress can protect it if we act in a fiscally responsible way. Also, in seeking solutions to ensure benefits for future generations, I would oppose risky “quick-fix” financial moves some favor that I believe would further undermine Social Security. Instead, I want to instill greater fiscal accountability for all federal spending while examining practical means of giving younger individuals more control over how the money they contribute to Social Security is spent.

I am committed to the idea that the hardworking families of Ohio know best how to spend their own money and that more of it should remain in their own pockets. Low taxes foster a healthier economy across the board—encouraging entrepreneurship, job creation and improving the international competitiveness of our nation’s businesses.

I will continue to support the extension of the 2001 and 2003 tax cuts and will stand adamantly against the return of the marriage penalty, the halving of the child tax credit or the continuation of the death tax. I also support phasing out the oppressive Alternative Minimum Tax and reforming our tax code to make it more manageable and understandable to Americans.

Though it is important to fully support our troops in the field, it is no less important to support them when they return and in their times of need. These brave men and women have risked everything to serve and defend us, and we owe them our very best. Our veterans deserve excellent benefits and the best medical care that we can give them—particularly when they return home wounded. For this reason, I and my staff are available to help our Ohio veterans from the 4th District when they need assistance in dealing with the Veterans’ Administration or Department of Defense.