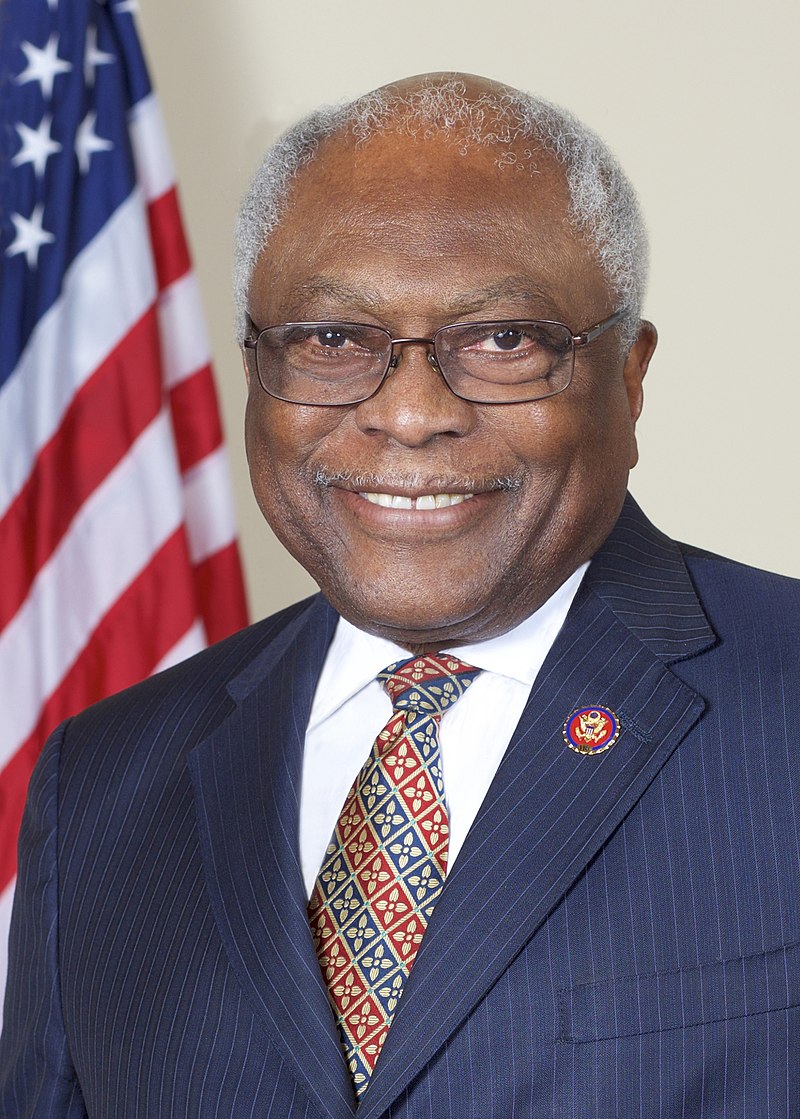 Contact Representative James E. Clyburn
James Enos Clyburn is an American politician and a Democratic member of the U.S. House of Representatives from South Carolina. He has served as House Majority Whip since 2019.

President Barack Obama has said he is, “One of a handful of people who, when they speak, the entire Congress listens.” James E. Clyburn is the Majority Whip and the third-ranking Democrat in the United States House of Representatives. He previously served in the post from 2007 to 2011 and served as Assistant Democratic Leader from 2011 to 2019. Working with the internal caucuses, he plays a prominent role in messaging and outreach.

James E. Clyburn is the Majority Whip and the third-ranking Democrat in the United States House of Representatives. He previously served in the post from 2007 to 2011 and served as Assistant Democratic Leader from 2011 to 2019.

When he came to Congress in 1993 to represent South Carolina’s sixth congressional district, Congressman Clyburn was elected co-president of his freshman class and quickly rose through leadership ranks. He was subsequently elected Chairman of the Congressional Black Caucus, Vice Chair, and later Chair, of the House Democratic Caucus.

As a national leader, he has championed rural and economic development and many of his initiatives have become law. His 10-20-30 federal funding formula was included in four sections of the American Recovery and Reinvestment Act. Congressman Clyburn is also a passionate supporter of historic preservation and restoration programs. His efforts have restored scores of historic buildings and sites on the campuses of historically black colleges and universities. His legislation created the South Carolina National Heritage Corridor and the Gullah/Geechee Cultural Heritage Corridor, elevated the Congaree National Monument to a National Park, and established the Reconstruction Era National Monument in South Carolina’s Lowcountry.

Congressman Clyburn’s humble beginnings in Sumter, South Carolina as the eldest son of an activist, fundamentalist minister and an independent, civic-minded beautician grounded him securely in family, faith and public service. His memoir, Blessed Experiences: Genuinely Southern, Proudly Black, was published in 2015, and has been described as a primer that should be read by every student interested in pursuing a career in public service.

Jim and his late wife, Emily England Clyburn, met as students at South Carolina State and were married for 58 years. They are the parents of three daughters; Mignon Clyburn, Jennifer Reed, and Angela Clyburn and four grandchildren.

For nearly a decade, Republicans have made rolling back the Affordable Care Act (ACA) one of their top legislative priorities. With each attempt, Republicans are trying to eliminate health insurance coverage for millions of Americans. House Democrats have opposed these Republican efforts at every turn and are working to build upon the success of the ACA so that all Americans have access to affordable and equitable health care.

Since the start of the 116th Congress, House Democrats have advanced the following policy goals:

House Democrats are committed to protecting our democracy and ensuring that all eligible Americans have the right to cast a ballot that is counted. Voter suppression has proliferated over the past decade, and the elimination of a key provision of the Voting Rights Act by the Supreme Court in 2013 in Shelby County v. Holder has cleared the way for the enactment of many insidious obstacles to the ballot box. At the same time, campaigns are unduly impacted by large contributions and expenditures, corporate lobbying undermines the public interest, and our political system is susceptible to nefarious foreign influence.

The House passed the For the People Act of 2019, which expands voter registration and voting access, makes Election Day a federal holiday, bans purging voters from voter rolls, restores the franchise to Americans who have completed sentences for felony convictions, promotes the adoption of paper ballots and ballot audits, ends partisan gerrymandering, protects election systems from cyberattacks, curbs the influence of big money in politics, and strengthens ethics laws.

House Democrats are also working to document voter discrimination throughout the country to determine which jurisdictions should be subject to an updated coverage formula under Section 5 of the Voting Rights Act, which requires the “preclearance” of changes to election laws in places with a record of discrimination. Preclearance is a vital tool to combat threats to the franchise that should never have been shelved by the Supreme Court, and it must be reinstated pursuant to the Court’s opinion.

At the heart of the Democratic message is the belief that all Americans deserve a well-paying job and a fair shot at an economically secure life. Unfortunately, the Trump Administration’s agenda puts corporate profits before the interests of workers. House Democrats have been working to establish the foundations of a strong economy with wage growth and opportunity for all.

Since the start of the 116th Congress, House Democrats have advanced the following policy goals:

• Restoring and reinvigorating the Consumer Financial Protection Bureau. Since taking office, President Trump has worked to systematically remove power from the Consumer Financial Protection Bureau. While Republicans listen to Wall Street over Main Street, House Democrats have passed legislation to ensure that the nation’s consumer watchdog is a robust agency that works on behalf of all Americans—especially military families and college students—and brings an end to predatory lending practices.

• Ending gender-based wage discrimination. For far too long, women have not been receiving equal pay for equal work. While Republicans have been in denial of that fact, House Democrats passed the Paycheck Fairness Act to protect individuals who seek to end pay disparities in the workplace. This groundbreaking legislation includes a requirement that employers provide valid (i.e., job-related) reasoning for pay disparities between men and women, restrictions on how employers can use salary histories of prospective employees, prohibitions on retaliation against workers who discuss their wages, and the removal of obstacles against class-action lawsuits challenging pay discrimination.

• Promoting net neutrality. In our era of constant technological advances, not having access to quality and affordable broadband internet service means not having equal opportunity to succeed. Under the Trump Administration, the FCC has eliminated net neutrality requirements, letting internet service providers team up with corporate interests to secure hefty profits at the expense of consumers. Affordable internet access is already difficult to find for millions of Americans. By passing legislation to reestablish net neutrality, House Democrats are ensuring that households everywhere are not held hostage by threats of high costs and slow speeds.

• Reforming the tax code for working people. The 2017 Republican tax bill was a fiscally irresponsible handout to corporate interests and the top 1% at the expense of current and future generations of taxpayers. House Democrats remain committed to undoing the damage from this tax scam and to providing relief for those the Republican bill neglected. The House has passed legislation that reverses the GOP tax increase on Gold Star families, and the House Ways and Means Committee has advanced legislation to expand the Earned Income Tax Credit and Child Tax Credit, along with a provision introduced by Whip Clyburn to repeal the GOP bill’s tax on charities and places of worship.

Now more than ever, voices of hatred and division threaten our national unity and our strength as a nation of immigrants. House Democrats are working to ensure that America lives up to its highest ideals. This year, the House has passed resolutions condemning white nationalism, white supremacy, anti-Semitism, anti-Muslim bigotry, and bigotry against minorities.

Among those most vulnerable are our fellow Americans in the LGBTQ+ community. House Democrats passed the Equality Act to prohibit discrimination of the LGBTQ+ community in public accommodations, public housing, education, and employment. Gender identity is specifically defined as among the prohibited categories of discrimination. House Democrats have also passed legislation that would block the Trump Administration’s ban on transgender Americans serving in the military.

House Democrats support comprehensive immigration reform that includes smart border security, common-sense reforms to our immigration laws, and a pathway to citizenship for undocumented immigrants. The House passed the American Dream and Promise Act of 2019, which prohibits the removal of certain undocumented immigrants brought to the U.S. as children and those who have lived here for many years under Temporary Protected Status and Deferred Enforced Departure.

Whip Clyburn supports H.R. 40, a bill to study the crushing economic, educational, and health impacts of centuries of slavery and later statutorily recognized forms of discrimination (like Jim Crow laws) on African Americans. This commission will recommend appropriate remedies to address the negative impact of intentionally structured disenfranchisement and discrimination. Congress must act so that we do not repeat the mistakes of the past and instead move toward a brighter future for all Americans.