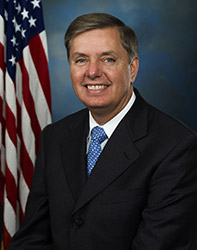 Contact Senator Lindsey Graham (R-SC)
Lindsey Olin Graham is an American politician who serves as the senior United States Senator from South Carolina, a seat he has held since 2003. A member of the Republican Party, Graham has served as chairman of the Senate Committee on the Judiciary since 2019.

A fighter who doesn’t back down from a challenge. A conservative who gets things done. A leader who puts our country above all.

Raised in Central, South Carolina where he lived with his family in a single room behind the liquor store, restaurant, and pool hall owned by his parents, Lindsey Graham began his climb toward the American Dream.

The first in his family to attend college, Lindsey lost his mother and father within two years of one another. While still in school, he took on the responsibility of helping raise his 13-year-old sister, Darline, and running the family businesses. He eventually legally adopted Darline.

After law school, Lindsey joined the U.S. Air Force as a member of the Judge Advocate General Corps, where he acted as a military prosecutor and defense attorney. During his six years of active duty, Lindsey served both stateside and in Europe where he was involved in numerous cases.

Even after being elected to the United States Senate, Graham continued to wear the uniform and serve in the U.S. Air Force Reserves where he performed reserve duty in the war zones of Afghanistan and Iraq.

For the bulk of his 33-year military career, Lindsey served in the U.S. Air Force Reserves. He retired in 2015 as a colonel.

Elected to the U.S. House of Representatives in 1994 and the U.S. Senate in 2002, Lindsey Graham is the current Ranking Member of the Budget Committee and former Chairman of the Judiciary Committee. He is a well-respected leader on national security matters and is known for his work to solve the biggest problems America faces.

During his tenure in the Senate, Lindsey has led the charge to confirm a record number of conservative judges, reform entitlements, get government out of the way of job creators, rebuild the military, and keep Americans safe by defeating Radical Islam.

Thanks, in part, to Senator Graham’s work and leadership on the Judiciary Committee, Supreme Court Justices Brett Kavanaugh and Amy Coney Barrett, along with over 200 federal judges appointed by President Trump, now sit on the bench. When Republicans controlled the Senate, critics denounced the committee’s operation as a conveyor belt for conservative judges, a comment Senator Graham considered to be a compliment. Protecting the rule of law and the Constitution has always been a top priority for Lindsey Graham.

Senator Graham continues to be front-and-center on issues of judicial reform, national security, defense spending, and the need to restore America’s leadership position as a force for global stability. He has proven that he has the character and drive to tackle the tough issues and defend our nation.